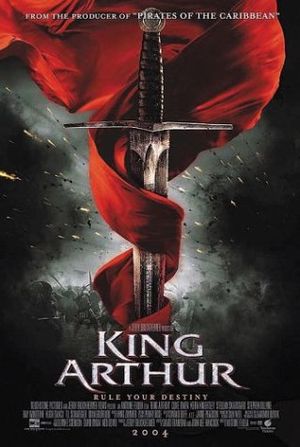 King Arthur is an action / adventure film produced by Touchstone Pictures and Jerry Bruckheimer Films. In this film, the mythical content of the Arthurian legend is dispensed with and the plot is brought forward a few centuries. This is based on archaeological findings that are supposed to confirm the theses of the film. That is why the film was advertised in the USA as "The Untold True Story That Inspired The Legend".

Directed by Antoine Fuqua, the screenplay is by David Franzoni. The leading roles were cast with Clive Owen (as Artus), Ioan Gruffudd (as Lancelot) and Keira Knightley (as Guinevere). King Arthur had its US premiere on July 7, 2004, but only in the cut version. The version originally intended for the cinema was released exclusively on DVD in 2005 as a director's cut. 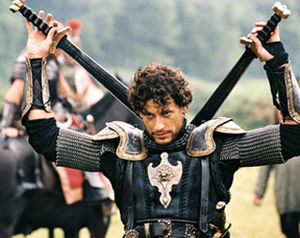 Lancelot, the master of the two-sword fight (© Touchstone / Bruckheimer)

Arthur, also known as Artorius or Artus, is portrayed in this film as a Roman officer, son of a Roman and a Celtic mother. He directs Sarmatian cavalry in Britain during the 5th century AD. This cavalry guards Hadrian's Wall in front of the Woads (based on the real tribe of the Picts), a tribe of mysterious natives who oppose the Romans, led by the Merlin.

Arthur and his men hope for the end of their 15-year military service. They are already planning their future lives when they are sent on a final mission by Bishop Germanus. They are supposed to protect a Roman family from being attacked by the hostile Saxons. As the Romans withdraw from Britain, only Arthur’s troops remain to take on this task.

When they reach the villa of the Roman family, Arthur discovers that the father of the family had several natives locked up and tortured. Arthur saves the young and pretty Guinevere from the dungeon and takes her with him on the way back to Hadrian's Wall. On this way, however, they encounter the Saxon army, led by Cerdic and his son Cynric. After a hard and long fight on a frozen lake, Arthur and his troops can return largely unscathed.

During the return a love affair develops between Guinevere and Artus as well as between Lancelot and Guinevere. Arthur also tells how he got his Excalibur sword. When he was little, his village was attacked. He ran to the cemetery and pulled his father's sword from his tombstone to defend his mother and himself.

When the troops finally arrive at Hadrian's Wall, they learn that Bishop Pelagius, who inspired the Knights of the Round Table, was executed. Arthur is disaffected. So it finally happens that the knights give up their Roman citizenship and form an alliance with the Woads. Together they want to defend the Wall and thus their (partly new) common home against the advancing Saxons. In the final final battle of Badon Hill, Tristan and Lancelot lose their lives, but the Saxons can still be defeated. Arthur marries Guinevere and, together with his troops, promises the Woads that they will protect Britain against future conquerors. 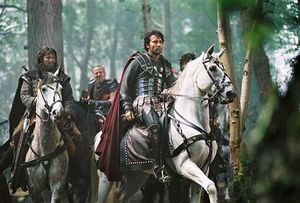 David Franzoni has been developing a scientific theory since the 1980s in which King Arthus is actually called Artorius Castus and was a Roman general during the 5th century. Bruckheimer found out about these considerations and immediately secured the rights, even though Franzoni had not even started the script. He wanted to make a realistic battle painting out of the fabric. He planned to do this with his friend and successful director Michael Bay, but his budget was too high and he was all too interested in the mythical part of the story, which Franzoni and Bruckheimer wanted to ignore. So after 5 years of co-development of the project, he was not hired as a director. Instead, Antoine Fuqua was hired, who had the film dark, rough and violent in mind - a direction that Bruckheimer and Franzoni also wanted to take.

In order to support the realism of the film, Bruckheimer did without modern special effects in the film. Classic, hard fights with real weapons should be shown. In addition, Hollywood celebrities were not cast for the film as their notoriety could become counterproductive. Instead of this, the roles were filled with Hollywood newcomers who matched their roles. The backdrops were also built in real life, including Hadrian's Wall.

Defusing the film and the director's cut 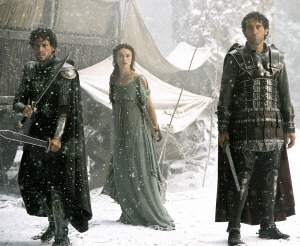 In keeping with the realism of the actual plot and the realistic and therefore dark look of the film, Bruckheimer also wanted realistic battles. With Antoine Fuqua, who with Training Day and Tears of the Sun Already made two realistically oppressive films, he seemed to have found the right director: "I suspect that Jerry thought I was the right man because I see this film very rough and tough. You can literally feel and taste the violence and death. You can feel the cold and despair. It's pretty apocalyptic."said Fuqua about the film in his vision. To support this, the producing Disney Studio also accepted a high youth rating. They planned the most violent and brutal film from this house, an R rating was targeted from the start and the toughest scenes out Platoon and Braveheart were considered the minimum standard.

But things turned out differently: Troy also received an R rating in the USA and mercilessly flopped at the box office, and Disney's other big budget productions for 2004 (Alamo and Hidalgo) did not recoup their costs. That is why the management asked Bruckheimer for an interview. In this one decided on the part of Disney that the film had to turn from a tough medieval war film into a summer blockbuster suitable for the masses, which requires a PG-13. To do this, the dark tone of the film had to be weakened and the fight scenes now had to do without blood and particularly disturbing scenes.

Images like the one of Arthur beheading his opponents and Lancelot wading through blood fell victim to the scissors, as did Tristan and Arthur's fight against the Saxon leader and many of the scenes of Keira Knightley as a fighting amazon. However, this was not clear to Fuqua from the start: After the meeting between the Disney's management team and Jerry Bruckheimer, the latter only gave him the task of shooting the most brutal scenes in the film twice. Once as planned, once suitable for PG-13.

When Fuqua found out that Disney had meanwhile decided to release the PG-13 theatrical release, he was disappointed and offended in his vision as a director, which he made clear in interviews. Since Bruckheimer also preferred the harder version and Disney is very careful not to upset Bruckheimer, the management gave in. At Bruckheimer's request, Fuqua's version was released on DVD. This is a lot longer than many other Director's Cuts called such, which made the critics, who spurned the original theatrical version, very positive in most cases. in the Director's Cut there are numerous more brutal alternatives to the fighting sequences shown in the cinema and the dark atmosphere of the film has for the most part been restored. However, some of the scenes that were mentioned at the beginning of the production cannot be seen. So far it is unknown whether these scenes cannot be seen because the director did not like them and did not make it into the film, or whether the scenes were not even shot due to the decision to defuse them. 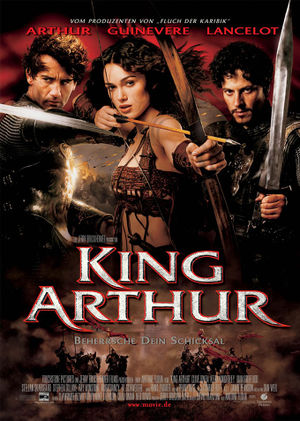 According to Keira Knightley, this poster does not show her true cup size (© Touchstone / Bruckheimer)

Comparison between the theatrical version and the director's cut

Official German webpage for the film