Who discovered the train engine? Over the past few decades, LEGO has reinvented its railroad system over and over again. In the case of the rails and the drives, there are always different systems that are more or less compatible with each other.

It's not that easy to keep track of things ...

The most important eras at a glance: The curve radius of LEGO railroad tracks has remained the same in all eras. It is 40 knobs measured in the middle of the rail. Large curve radii can be achieved with a trick. This niche is also occupied by third-party providers and offer various other switch geometries.

The next generation of LEGO electrics appeared in autumn 2018: Powered Up. Powered Up railways have their power supply on board and can therefore run on all rail systems. 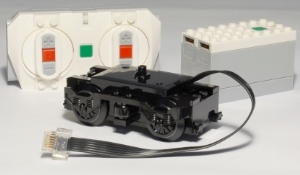 The main difference to Power Functions is the transmission of signals. Infrared is being replaced by Bluetooth. It can be controlled using an app on a mobile device with Bluetooth. Every smartphone and tablet has Bluetooth on board and LEGO offers its own app for remote control. There is also its own Powered Up remote control # 88010.

Instead of a receiver and the power supply, a “hub” now takes on this task. It is as big as the Power Functions battery box, but contains the 6 AAA batteries as well as the electronics with the Bluetooth receiver.

Compared to the Power Functions System, however, only a maximum of two consumers can be connected; two railway motors cannot be combined at one output. Either two railroad engines or one railroad engine and a light can be operated with one hub. From the point of view of the previous system, a real step backwards.

The Powered Up components can be recognized by the six-core cables and the new plugs. They are similar to well-known network plugs, but are LEGO-specific. Unfortunately, multiple plugs cannot be connected to one output of the hub.

The Powered Up Railway Motor # 88011 draws power from the hub that is carried on the train. A cable is permanently installed with the motor. The wheels used are standard size railway wheels with a Technic cross hole. A Technic axis of length 6 is used as the axis.

This motor is only available in black, the side panels (with cutouts for the Technic axle) also in black.

As an introduction to the topic of LEGO trains, I would recommend the latest system. Older systems are only available on the second-hand market and can be correspondingly expensive.

Power Functions as a standard system for the electrification of LEGO models also found its way into LEGO railways by 2017. Power Function Railways have their power supply on board and can therefore run on all rail systems. Since then, LEGO has only been delivering plastic rails. 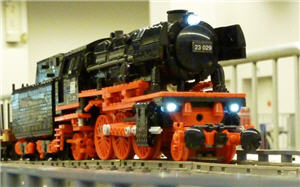 For LEGO fans there are e.g. the Emerald Night # 10194 or the Maersk Train # 10219. These can be independently equipped with Power Functions or another drive system.

The individual Power Functions components and the Power Function train motor # 88002 can also be used to build very nice drives, especially for steam locomotives. In the meantime, various train wheels are also available.

The PF railway engine # 88002 (2nd generation) draws power from batteries or accumulators that are carried on the train.

A PF cable is permanently installed with the motor. The wheels used are standard size railway wheels with a Technic cross hole. A Technic axis of length 6 is used as the axis. This engine was only available in black, the side panels (with cutouts for the Technic axle) in black and light gray.

The RC (Remote Control) system from LEGO for railways represents a short-term "bridge technology". In 2006 the 9 V system with metal rails was already discontinued, but Power Functions was not yet ready for decision. Similar to Power Functions, there is a remote control to control the trains. In the locomotives, the receiver and the battery box are firmly integrated into the train base plate - which makes the system very inflexible. It was powered by the (somewhat weak) engine # 8866.

The PF Eisebahnmotor # 8866 (1st generation) draws power from batteries or accumulators that are carried on the train. The old 9 V cable is used as the cable; it is attached to the top of the motor. Standard-size railway wheels with a Technic cross hole are used as wheels. A Technic axis of length 6 is used as the axis. This engine was only available in black, the side panels (with cutouts for the 6 mm Technic axle) in black and light gray.

From 1991 to 2004 LEGO used the 9 V system for LEGO trains. Distinguishing features are the live tracks and the metal wheels through which the electricity reaches the 9 V train engine. The running characteristics of the 9 V train wheels are excellent and the rails look very realistic. Therefore, this system is very popular with LEGO fans to this day. This is also reflected in the horrendous prices, especially for straight 9 V rails and the 9 V train motors. 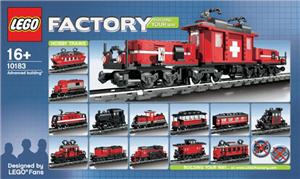 Power function trains or older battery trains with 4.5 volts can of course also run on the 9 V rails.

The available track shapes are very limited, but with the help of large curve radii or ME Metal Rails there are a few possibilities to realize other track geometries. 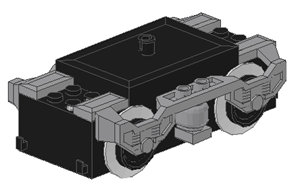 There is a 9 V connection plate on the top to connect train lights. (Conversely, this connection plate can also be used to supply this motor with power from a PF battery box. Then this 9 V railway motor can also run on plastic rails.) The side panel can be removed.

This engine was only available in black, the side panels in black and light gray.

LEGO came closest to a real model railroad in the 1980s with the 12 V railroad (gray era). The train is controlled by a heavy transformer, which supplied the 12 V railway engine with electricity via live central rails. The gaming experience was further enhanced by remote-controlled accessories (switches, signals, decoupling systems, level crossings). 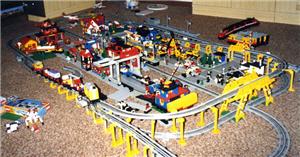 The tracks were clipped onto the sleepers. This makes the rails very stable, but assembly and dismantling are a bit more time-consuming than with the 9 V system.

Some sets from this time, e.g. the steam locomotive # 7750, have developed an absolute cult character and well-preserved copies can improve the pension fund.

Ben shows in his video Classic 12 V LEGO train 7740 running on Power Functions how the 12 V train # 7740 can be operated with Power Functions (on 9 V rails) with a small modification. LEGO is very compatible here, even beyond the actual system boundaries. In order for the whole thing to work, you only have to attach other plugs to the two middle, current-carrying cables of the power function cable, which fit into the old 12 V train engine. 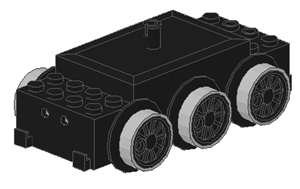 The 12 V railway motor # 7865 is supplied with power from the middle rails via contacts on the underside. Plug connections on the motor (on the side and on top) allow 12 V cables to be connected for train lights.

This engine was available in black and (rarely) in red. 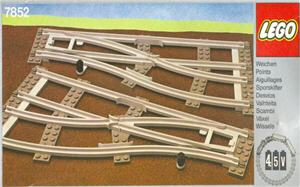 The 4.5 V railroad system from the gray era is a further development of the 4.5 V system from the blue era. However, it was mainly used as an “entry drug” into the 12 V system, as many trains could be retrofitted simply by replacing the motor. The straight and curved plastic rails could easily be used again and only had to be supplemented with the live central rails. 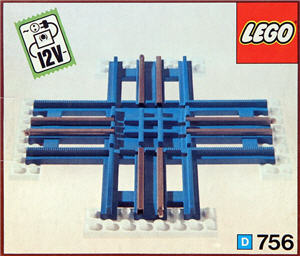 Already at the end of the 1960s there was a 12 V system parallel to the 4.5 V system. The train is controlled by a heavy blue transformer, which supplied the 12 V railway engine with electricity via live center rails. The accessories were not as diverse as they were later in the gray 12 V era, but there were already remote-controlled switches.

Set # 182 from 1975 is one of the largest sets from the blue era of the 4.5 V period. It was also my first LEGO railroad time that I have ever received a gift.

In the 4.5 V system, the railway engine is powered by batteries that are carried in a special battery trolley. The signal could bring the train to a stop, with the direction switch the moving train could change its direction.

The tracks consisted of blue, individual rails that were attached to white 2x8 plates as sleepers. All in all, not a really stable proposition. 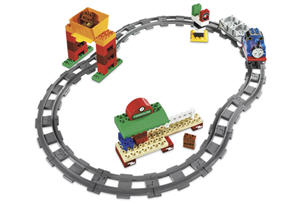 In addition to the "real" LEGO railroad, LEGO has the following "rail-bound" systems: