Lousy detection rates, unreasonable operation, expired license: there are several reasons for switching antivirus programs. But there are also pitfalls - this is how you can avoid them.

Day after day, new malicious programs see the light of day on the Internet, which are no longer all laboriously freshly programmed. They are often generic: malicious code is created automatically using a modular principle in numerous variants - this is where the sheer mass of malware threats comes from. Also since criminal hackers (i.e. crackers) are constantly refining the technology of their software, you should use an up-to-date antivirus program that keeps pace with this. If you no longer trust your current protection solution or if it eats up too many resources, it is time to switch to a competing product. Before installing it, you should uninstall your previous guard program: Several antivirus tools with background guard usually do not get along, slow down the PC and cause problems such as Windows hanging up. It is even possible to identify each other as malware, but this happened more often in the past than it is today. The following tools will help you shake off your old antivirus thoroughly.

Important note: If you follow a download link, you will see a red download button in the top left. If a new page opens after clicking on it, but no other button or text for the download manager appears in the top left and the download does not start either, please temporarily deactivate your adblocker - and reload the page.

Fix antivirus problems by uninstalling it

Antivirus programs dig deep into Windows in order to examine the file system with their scan modules (on-access scanners) and the HTTP (S) data stream while surfing. This makes the removal of such software a system-related thing - and this does not always work and is sometimes incomplete. Protection programs are usually integrated into Windows by setting up files, folders and registry entries as well as drivers and services. Removal tools will help you to remove all these components smoothly: Depending on the provider, such a tool is used instead of the normal deinstallation routine - or after it has been used. Here are removal tools from the major manufacturers: Get the tool that matches the unwanted program and run it. Follow the instructions on the screen; the removal is usually automated; with the removal tool for Avast, you boot into Windows safe mode (simply by clicking in the removal tool). Removal tools are not limited to antivirus products; depending on the application, they also take security suites into account, which in addition to an antivirus module contain other components such as a firewall.

The removal of security software is particularly useful for complete PCs and notebooks: They often have pre-installed test versions that only run for a limited time - often 30 days. Although the most important or all functions are usually available during this test phase, requests to buy appear again and again - and ordering the software directly from the manufacturer is usually not the cheapest option. Removal tools like the McAfee Consumer Products Removal Tool and Norton Removal Tool are sweeping away their manufacturers' products. The Norton Cleanup Solution gives you the choice of uninstalling and reinstalling Norton, or just uninstalling it.

In the past, AppRemover was a recommended tool for uninstalling protection programs from different manufacturers. It worked with antivirus, anti-spyware, and firewalls. The tool no longer works reliably because it has not been adapted to the latest product versions. An update even worsened the range of functions: the AppRemover once had two modes. One mode uninstalled the existing security software, the other looked for remnants of security applications that had long since disappeared. There is no longer any choice, currently the tool only functions as an uninstaller - and does that more badly than right.
A modern solution for removing protective software is the Eset AV Remover: The utility removes applications from different providers - Eset has published an overview in its support area. Open the list with a click.
Probably the best universal program with which you can get rid of antivirus and security suites is the antivirus removal tool. It is portable and comes with the official removal tools from various manufacturers in a folder. The erasing of unwanted applications does not take place via your own routines, but in an official way. This ensures a reliable way of working. You select the protection program to be removed from the drop-down menu in the antivirus removal tool interface; it then calls up the portable uninstaller from the respective manufacturer. 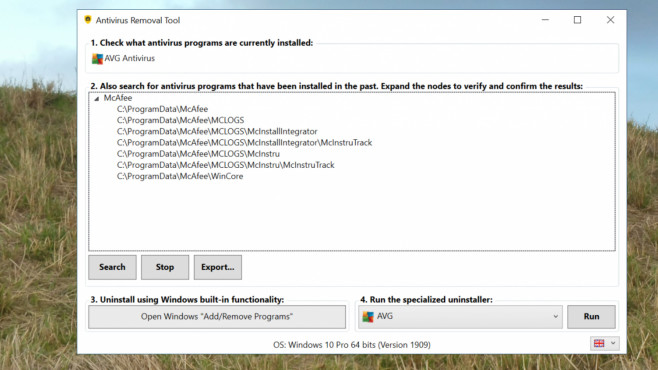 The Antivirus Removal Tool is a jack of all trades for virus protection tool removal.

Usually, you get rid of a program by pressing Windows-R appwiz.cpl and after a mouse click on "OK" double-click on the associated software entry. Alternatively, you can access the corresponding software management window via the system control link "Uninstall a program". The horse's foot: There may be residues after removal - in the form of (SYS driver) files and / or registry entries. If there is a problem with uninstalling, you have the choice: reinstall Windows (impractical) or use a removal tool on the software to be gotten rid of. With the latter cleaning software, you will also avoid having installation difficulties with a new antivirus program.
A possible alternative to removal applications: the setup program of the new protection product sometimes detects the existence of a competing solution; sometimes the new product to be imported removes the old one and thus helps with deinstallation. The latter is the case with Trend Micro: It complained about installed programs from Panda, Malwarebytes and Spybot in the test. Removal tools are usually even better suited for removal because they mostly come from the manufacturers of the associated protection products; they know best where which program components are on the record. Removal tools not only help with deinstallation, but also if you want to upgrade to a newer version of your protection program, if the installation is damaged or a reinstallation fails. In the past, removal tools were more useful than they are today: A few samples showed that uninstalling protective software hardly leaves any residue. However, it doesn't hurt to use a removal tool to handle the removal procedure as smoothly as possible - you could download such a tool as a precaution in case something goes wrong during the antivirus upgrade (with a disconnected internet connection).

Ideally, you should proceed as follows: have the installation file for the new antivirus tool ready (if not on the purchased CD, download it), get the appropriate removal tool for the old program, disconnect the Internet connection. For the last-mentioned step, you can pull out the LAN cable - or press a special WLAN key on the notebook, usually together with the Fn key; alternatively, cut the connection via Windows-R and ncpa.cpl and in the new window via the context menu of the (W) LAN adapter. As soon as there is no longer a web connection, remove the old protection application. To do this, first go the conventional way with the Windows on-board tools. Then use a removal tool for possible residues. If it finds ballast, sweep it away. If you like, you can use a removal tool directly. This usually works at least as reliably as the normal uninstallation routine and even if this uninstaller file has been deleted - the lack of it usually prevents an uninstallation.
Among other things, Kaspersky does not recommend using the removal tool immediately at Avira: The tool only serves as a registry cleaner, i.e. it does not remove any file system elements, so you should use appwiz.cpl first and then afterwards if there is a strong demand for thoroughness, have the Avira Registry Cleaner scanned.
If you want to be on the safe side that no remnants of the removed antivirus are left, you can scan the Windows registry with CCleaner. In the "Registry" area, select the "Scan for errors> fix selected problems" buttons. This removes any possible last remnants. When the cleanup is done, install the new primary protection product. If the installation file is a web installer (it loads data from the Internet), re-establish an Internet connection for the installation. By the way, you don't need to be afraid if you have a brief web connection without the new protection program: Windows 8.1 and Windows 10 activate their basic virus protection "Windows Defender" for this period. In Windows 10 in newer operating system versions, after some name changes, it is currently called Microsoft Defender Antivirus.

Safety NewsletterYou are almost there!

Quickly informed about patches
and current security vulnerabilities. To complete the order, please click
on the confirmation link that you just emailed
got.

All newsletters at a glance

Use several antivirus programs at the same time?