Has the smartphone ecosystem been saturated?

Is the app ecosystem broken?

We take a look at the difficult field of app marketing

App stores should actually be a paradise for self-made guys and girls. It's all about billions and app publishers can make an incredible amount of money with just one app. But lately the number of voices that paint a negative picture has increased. So only a few make the big money. Small developers have little chance of being discovered or making a profit. App expert Alex Austin wrote an impressive and insightful article, and business strategist Michael Wolf wishes good luck to everyone who wants to make money with apps (but doesn't believe in it). We show what has to be done on the marketplace and whether app development is still worthwhile.

How do you find the next hot app? At the moment this is not so easy with over 1.3 million apps in Google's Play Store and over 1.2 million in Apple's App Store.

45,000 new apps arrive in the App Store every month, the chance of being discovered in this mass and of making it into the store's Top 1000 is 0.1 percent or less. And even if they did, they could hardly get enough sustained engagement to build a lucrative business. An interesting principle in business is the 80/20 rule (Pareto principle) mentioned by Alex Austin from deep link provider Branch Metrics in his article. This says, for example, that 80 percent of sales are achieved with 20 percent of the products. If that also applied to the app business, everything would be okay - instead, as already shown, a 99/1 rule applies here. It seems as if 99 percent of sales and engagement are centralized to one percent of the players.

In the worst case, this means that app stores have long been saturated and app developers should rather concentrate on business models on the web. Here, engagement can be achieved and monetized more easily. In any case, the project is easier to find. But why is the App Store problem in detail?

About finding and being found

The biggest problem for developers is that users have to find their own app first. There are actually only two options available here: paid ads on Facebook, Google and other platforms or visibility in the App Store. In order to go one of these ways, however, the app must already have been discovered. What developer can afford to spend a ton of money on new users before they pay for the first time? According to a new survey, "loyal" users who open an app three times or more cost over four US dollars. We already reported a few weeks ago that some successful game developers are paying around US $ 20 for new users - but this is also the best chance of making the money back. It will be even more difficult at Christmas because large companies are now investing a lot of money in mobile marketing and thus making important inventory locations controversial or making them more expensive for app developers. 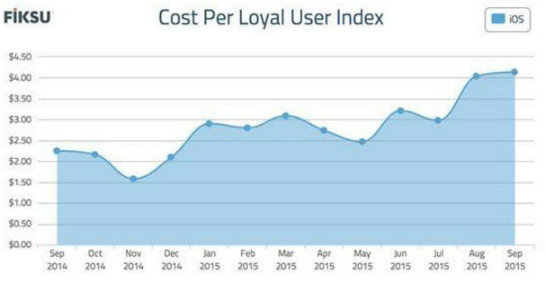 Those who buy installs now pay over four US dollars per user. (Source: Fiksu / Venture Beat)

Being found in the App Store doesn't cost any money at first, but it takes a lot of work and also gives preference to apps that have already been discovered. The three ways for the user to discover new programs are the “Recommended Apps” page, the top charts and the search. The latter is relatively useless if the user does not know the name of the app exactly. In order to get into the app recommendations, you either need good relationships with Apple and Google, a big name, lots of downloads at the beginning or a lot of luck - plannable looks different. That leaves the top charts, which in themselves already favor the strong. Anyone who manages to cross the line of the six most popular apps in a category can count on new users who will become aware of the app. As you can see in the screenshot, three of the top apps are from big players and three (in the broadest sense) are games.

The app market is getting tighter 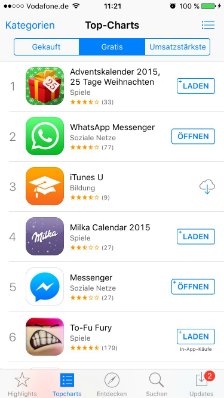 Once the first stage is done and the user has discovered the app, other problems arise for developers: installation and configuration. Websites and apps can usually be used without spending time or resources. This is different with smartphone apps; another hurdle arises for users. The available storage space on the smartphone alone often decides on an installation. Who always has enough space and who voluntarily deletes their own photos just to install a new app?

The App Store also shortens the information available about the app. The focus is on the ratings. Those who do not actively follow the reviews run the risk of quickly slipping into the 2-3 star range (like most apps). After all, it is mainly disappointed users who rate an app, and it is quite difficult to get positive reviews. This reduces the chances of many downloads immensely. Anyone who has managed to get a good rating must also convince with the title, screenshots and description. Many try to attract attention with completely capitalized texts or colored letters.

It has to be done differently

The app ecosystem is obviously in a tight spot and shouldn't be the first port of call for creative developers who want to earn money with their product. However, there are already proposed solutions to tackle the problem. Alex Austin suggests starting with the app stores. The top charts should not be set up by the number of downloads. Instead, the ranking would also be influenced by the age of the apps and the engagement during the lifetime. If the usage figures drop over time, apps with high download figures would slide down the charts and make room for new ones.

Access to apps should also be simplified. People are less interested in the shell than in the actual content. Perhaps an app is only used once to read a text before it is never opened again. It would be better, however, if the user could get to the next via a link from another app - without having to tap several buttons. This would bring the ecosystem closer to the web, after all, switching between websites is much easier than between apps. An automatic download would be possible, for example, if users from another native app click on a link and it has been made clear beforehand that this leads to another app. The operating system could delete the once-only app after three days of inactivity.

Google seems to have recognized the problem. In the future, app content should also appear in the results of mobile searches. Whoever clicks on this ends up in the app interface, which is streamed by Google servers and does not run on the smartphone. App developers could increase engagement and even monetize users who don't even download the app. Before this option becomes available, app developers continue to have bad cards. We had already written about the possibility of using influencers as a hook, but only a few can afford that. In their desperation, some developers therefore resort to drastic means, such as "charting". They buy tens of thousands of fake installs in Asia in a very short time, only to somehow make it into the top 50 of the app store. At Apple, this requires around 23,000 downloads in one day. Small developers can only hope that the app ecosystem will continue to open and change, otherwise they should quickly turn to other platforms.