How do I have a spiritual experience

Why this is the highest spiritual experience: just be yourself

Why only real silence leads to being yourself

When the mind is active, our attention is directed outwards - away from “being” towards seeing, doing or thinking. The “knower” literally gets lost in the world around him, in what he knows.

But what would happen if we could put the mind in a state of pure stillness: no seeing, no doing, and not even thought? Then there would be nothing left that would draw the attention outwards and the mind would come back to itself. Hence “knowing yourself” and “being yourself” is the same experience.

This is a very powerful transformative experience and yet people can live their entire lives without ever having this experience because they do not know how to put the mind into this state of pure stillness.

Trying to calm the mind doesn't work - as anyone who's tried will know. The more we try to force the mind to rest, the more we keep it active.

But with the right technique, the mind goes there by itself. It is like coming home for the mind, and the mind is already genetically programmed to be drawn to this state. He doesn't really want anything else. We just have to set this natural process in motion and the rest will happen spontaneously and effortlessly (see below).

Why real silence is the highest spiritual experience

But how can such ideas be reconciled with our modern, mechanical view of life, which sees the universe as a great machine? With this kind of worldview, any kind of conscious experience seems to be more of an invention of our imagination than a real experience. You can't experience something that doesn't exist - can you?

Nowadays the laws of nature can be derived from the interaction of the smallest particles. There doesn't seem to be a need to re-explain how it all works.

In ancient times, consciousness was equated with the wave of an ocean. Just as a single ocean rises to many separate waves, so there is an invisible, universal field of consciousness (we can call it "God" or "nature") which rises into individual expressions of individual consciousness.

In ancient times, people possessed techniques for bringing the mind into a state of complete calm, the experience of being oneself, as described above.

But if consciousness is a wave in the ocean, what happens when that wave becomes completely still? It becomes the ocean. 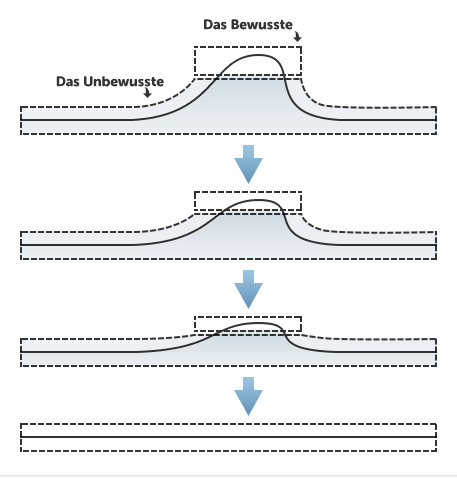 This is what we call transcending, we go beyond the finest thought impulses into a state of pure stillness. Coming to one's self means to consciously experience this state of oneness with our “higher self” - the ocean. The ancient texts say that this experience is absolutely necessary in order to develop our full human potential and people in ancient times had this experience on a daily basis. In doing so, they learned to experience their bond with nature and with one another over the long term.

Over time, however, this natural, effortless method of bringing the mind into a state of stillness has been lost. People began to understand meditation as a form of control of the mind, usually a kind of concentration. While concentration techniques can bring some relaxation, they actually prevent the experience of transcending. Concentration keeps the mind active, and an active wave can never become calm. Hence, meditation was seen as a method of relaxation rather than what it really was: a method of developing divine potential.

When people stopped experiencing the experience of oneness, their worldview also changed. They began to perceive each other as separate entities. The mind behaves like a muscle. If he is trained he gets stronger, otherwise he gets weaker. If we keep our attention always outward and always keep the mind active, only the tops of the waves, i.e. the most superficial layers of the mind, begin to develop. This becomes the part of the mind that we can consciously experience. The deeper layers of the mind are not developed, they rest in our subconscious and remain hidden from us.

Sometimes we feel the feeling of connectedness, e.g. when we love someone. Love is the feeling of being connected to another person. But in general, people forget their connection with their higher selves, with nature and with one another.

As such, they have also begun to change their worldview. They still believed that there was a God, a higher being, who was responsible for all phenomena in nature. But they began to see themselves separate from this higher being. The only way to connect with this higher being was through its “representatives”, the religions. Thus began the time of mediators between people and their higher selves.

Then came the scientists who were able to explain more and more natural phenomena in simple, material interactions. Suddenly it seemed as if God was no longer necessary at all. The whole universe seemed to function as one great machine, interacting with everything, according to the precise mathematical laws of nature.

At some point we even began to see life from this purely material plane. To describe how most scientists view the relationship between the mind and body (consciousness) we could use the computer analogy.