What is a traditional PBX program

What is a PBX telephone system?

PBX stands for Private Branch Exchange and is a private telephone network within a company or organization. The users of a PBX telephone system can make calls within their company or organization as well as with the outside world. Various communication channels such as Voice over IP (VoIP), ISDN or analog can be used for this. In addition, a PBX allows more telephones to be used than physical telephone lines (PSTN), as well as free telephone calls between users within a network. A PBX offers numerous functional features such as call forwarding, answering machines, voice recordings, interactive voice menus (IVRs) and queues.

PBX telephone systems are available both virtually as hosted or virtual solutions (sometimes also called Centrix) in data centers, and as software PBX solutions on your own hardware on site. 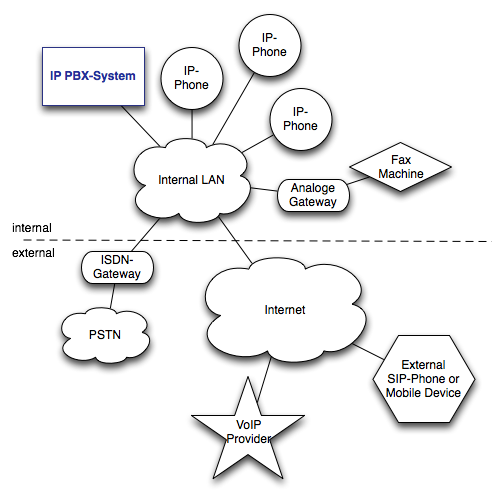 Cost savings from day one. Since the telephony is no longer networked separately but is implemented via the LAN, the cost savings start with the creation of the infrastructure.

Full flexibility. Although the internal telephony takes place over the LAN, there is still the possibility of using appropriate gateways, ISDN or analog lines as a connection to the outside world. In addition to traditional telephony, an IP PBX telephone system offers the option of making telephony purely over the Internet.

Easy options for expansion or adaptation. Do you want to expand your company and hire new employees? No problem! When using the LAN, telephones are not connected directly to the PBX. All they need is a free port in the company network, or they can even be connected to the company system via the Internet via a VPN connection. Multiple locations can thus be easily connected. Whether as "outsourced" telephones or by coupling two systems (for more performance in the system), site networking is problem-free.

Further cost savings through more favorable terms. There are various VoIP providers who can offer their services at much more favorable conditions than the providers of conventional telephony. Internal calls, even across locations, are generally free of charge with an IP telephone system.

Less maintenance. Merging the LAN and the telephone network not only saves money in terms of hardware. The maintenance of the system is also brought together and can thus be carried out in a considerably shorter time.

Easier configuration. Since most PBX telephone systems are configured via a web interface, this can be done from anywhere in the company network. Configuration interfaces are completely flexible and do not have to be made locally on the system.

Other advantages of IP telephony

What are the benefits of using an IP PBX telephone system for employees?

Every other participant can see directly from the availability status whether a colleague is currently available or in a conversation.

Mobile workplaces are completely problem-free through the use of IP telephone systems. Even when an employee is on the move, their mobile phone or laptop with an installed softphone can be logged into the system. The employee then uses it to make calls on the phone as if he or she were sitting at the desk.

Telephone conferences can be implemented directly on the system. A conference room is called and you talk to several participants at the same time, directly over the phone. This eliminates any travel times.

Employees are always kept up to date on missed calls via modern voicemail and notification systems. Of course, you can also implement the "classic answering machine". You can also have the messages sent directly to your email address as an audio file.

By connecting to CRM systems, customer data of callers can appear on the screen before the call has been accepted. This creates the possibility for the staff to adjust to the conversation before the receiver has been picked up.

This list contains only a part of all the advantages that an IP PBX telephone system brings with it. To find out more about the possibilities of IP telephone systems, simply visit our homepage.