What is the name of the knee pit

A beautiful piece of the "Nordalpenweg" in the middle of Austria

The Salzkammergut town of Bad Aussee is considered to be the center of Austria. The equally beautiful, manageable mountain hiking route connects Altaussee and Grundlsee. Place, lake and municipality are each named with the same name. Expectations for this part of the “Northern Alpine Path” can be high: the “Ausseer Königstour” delivers what the informal title promises.

Such a piece of the “Northern Alpine Trail” - opening up mountains, peaks, lakes in the middle of Austria - connects three mountain huts in the same section, all of which are superbly managed; they also enrich the "Ausseer Königstour" at. The route can be explained in a simplified way: Altaussee - Loserhütte - Albert Appel House - Pühringerhütte - Gößl. The route recommended in this way can be shortened individually or even tightened in a child-friendly manner.

First of all, it is advisable to reserve sleeping places. Second, leave overnight stays on Saturdays / Sundays as well as in connection with public holidays or window days to those people who do not have an alternative time budget. Third, use public transport in the Ausseer area. Fourth and finally: Every multi-day tour requires stable weather. In the Ausseerland, "smart people" also go for a walk in the rain. But because Mountain paths not a walking area such clever people go to the mountains when the weather is good. Nevertheless: Nobody is protected from bad (weather) surprises. However, if they do occur, they must be overcome well.

Arrival, approach and ascent to the hut

Park-and-ride at Bad Aussee train station. By bus to Altaussee. Opposite the “Kurhaus” stop is the parish hall. From the Fischerndorf district, path no. 254 - called "Prielerweg" or "Loserhüttenweg" - leads to the Loserhütte. The evenly laid out route would also appeal to a Peter Handke - "... I want to go every day ..." - in this case surrounded by views, panoramic views, deep views. On the Loserhütte (Section Ausseerland) is managed by Anna Gaisberger; The burly Ausseerin has long been synonymous with down-to-earth hospitality. If you book room no.5, looks straight to the Dachstein including the Simonyhütte and Seethalerhütte. It is as it is: The Dachstein Mountains - and the Dead Mountains - embrace the Ausseerland as if protectively.

... early risers may stand at the Loser summit cross, as well as on the neighboring Hochanger. So many rounded close and distant views fit as if tailor-made to the culmination point of the "Loserkrone".

On the other hand, the classic route from the Loserhütte initially to the Loser Alm. The subsequent one in any case "Karl-Stöger-Steig" opens up a lush, wide mountain pine area and turns out to be an alpine trail: downhill, uphill, downhill - and in between along a rock step, where wire ropes serve as handrails. The spring, close to the flip-up saddle, gives off shallow drizzle. After a gate and several lost meters of altitude, the Augstwiesen, used as pasture, spread. The path leads uphill again. At the lower edge of the hut village “Augstwiesenalm”, specifically on a grass crest, a bench invites you to: Im The two Schwarzmooskogel and Augst corners are in the field of vision. The signpost promises an hour's walk to the destination, that is, through the rustic Henarwald to the Henaralm, above which is the stately one Albert Appel House. The burly Florian Marl runs the farm up here: his “hut empire” is also his life. In the horizon to the west it says - who would have expected this? - the Bishop's cap. On the other hand, towards the south, as close as you can touch, the dominates Talking stone. The room no. 4, called "Hausermann-Stüberl", is the most beautiful bedroom in the Albert-Appel-Haus. From here you can reach Redender Stein, Henarsee, Woising, Wildensee, Rinnerhütte, and even - for those with good stamina and alpine experience - the Ischler Hütte. It stands on Altaussee soil. 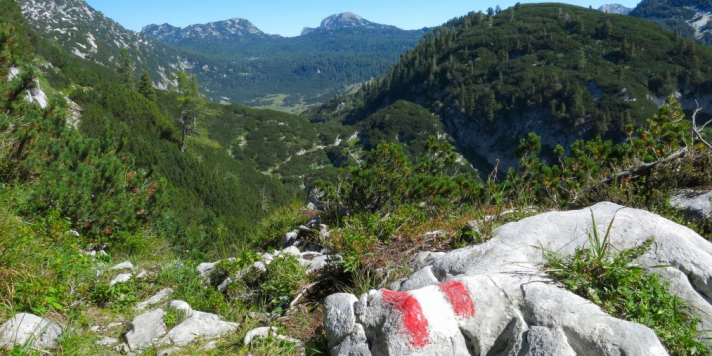 ... is five or six hours long, if the Redende Stein and the Wildgößl are also climbed. In any case, path no. 201 runs in a slightly elevated position; this enables an atmospheric overview, starting in "Hüttenmoos". After the two branches “Woising” and “Henarsee”, tree-free terrain opens up. Not only All-round views as if on the speaking stone Mountains along the border between Styria and Upper Austria. Watch out! At the foot of the Widderstein, two shafts drop extremely deep. A “stone woman” serves as a solid signpost. From the Meadow varnishes the "main route" runs straight ahead. However, rightly so, path no.239 to the Wildgößl lures you. Logically, the field of vision widens with every additional meter of altitude. Many an Ausseer admits: "I prefer to go to the Wilde Gößl ..." Despite this preference, there is peace over this mountain and all the surrounding satellites. It is equally simple Descent through the knee pit (small saddle) to the fork in the road on Abblasbühel. The "Nordalpenweg 01" leads on: to the Elmgrube. The anteroom of the mountain rescue hut is freely accessible.

After the ascent, many people rub their eyes and think out loud: "Why are the two swans so big?" On the Pühringerhütte Franz Schanzl lives and works according to the motto: "Work, music and mountains". The Schanzls are a family of musicians. It is standard that arriving hut guests ask (is there WiFi?) Rather than greet them. Still, at the end of the same day, everyone is satisfied.

... either with Elm or Rotg dishes? Or with both - or none of these two mountain huts at all? In any case, this is the fourth day of the tour Main focus preferably directed downhill. These include Elmgrube, Vorderer Lahngangsee, Schafbühel, Draußengatterl. The Marterl attached to the picture tree funny tells a serious incident: Steffi and Erna were struck by lightning.
After the damp Kanzlermoos, specifically below the Gößler Schwaiber, the path no. 214 meanders "over’ n Hagl ", that is the name of the final steep step, Towards the valley floor and ends at the Dorfbachbrücke in Gößl.

May the end be celebrated: Towards the village, the down-to-earth “Gasthaus Veit” tempts you; at the Shores of the Grundlsee is the “Rostiger Anker” inn. The bus stop “Gößl Strandbad” is located between these two restaurants. - Please, get in: return to Bad Aussee; "Gimpelinsel" car park or park-and-ride area at the train station.

What does this tour teach? It is a beginning. The advisory book title, "Ausseerland und Umgebung", promises a wide range of tours - in the middle of Austria. 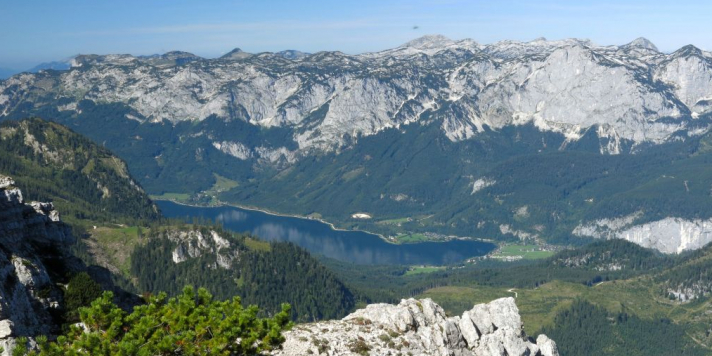 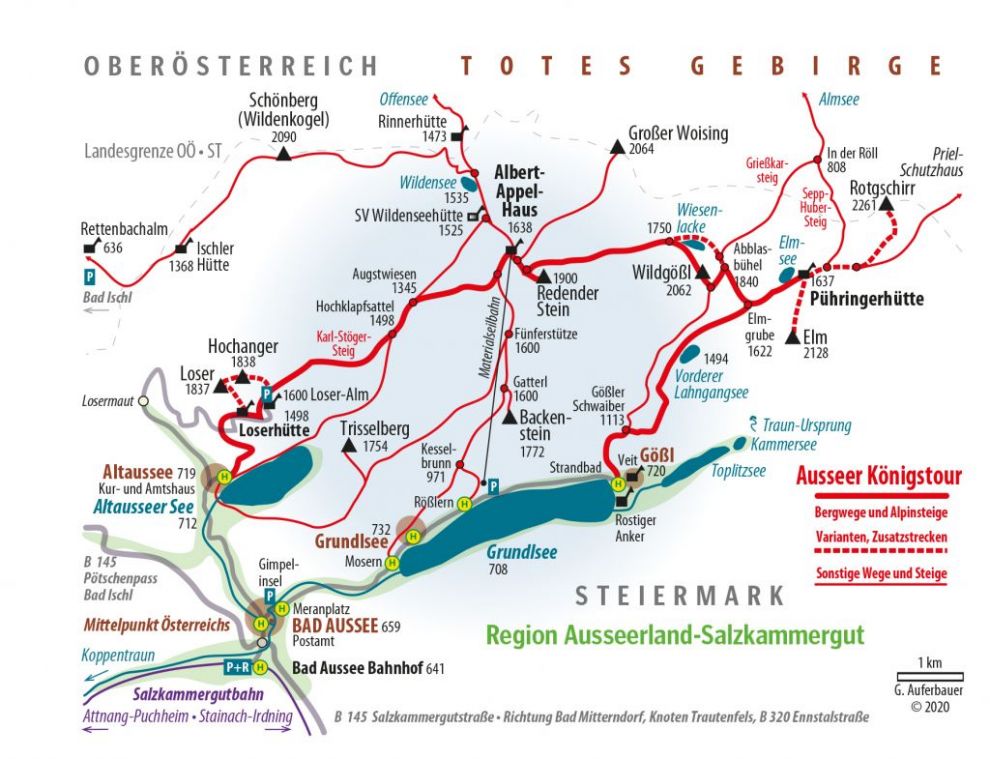 4-day tour - can be shortened or extended individually.