Which artist sang the song Intro

The players used to sing themselves, but pop stars have been singing the respective World Cup song since the 1990s - but not always better.

World Cup songs can stay in your ears for years - or not even find their way there. In the first few years the footballers were still singing themselves, nowadays the marketing of the official World Cup song alone is so profitable that both FIFA and the national football associations pay great attention to the selection and promotion of the respective song. In fact, it is mostly completely different performers who reach the ears and hearts of the fans with their football anthem produced to match the event.

German World Cup footballers used to sing themselves, as older fans can remember. In 1974 they picked up the microphone for the first time. Encouraged by Franz Beckenbauer's wonderfully weird chant "No one can separate good friends", which only achieved cult status in fan curves long after its publication in 1966, the 1974 World Cup eleven appeared as a kicker choir for the first time. “Football is our life” was the snappy song, fitting for the following World Cup victory. Four years later, in 1978, the footballers trilled “Buenos dias Argentina” with Udo Jürgens. The song sold better than the DFB-Elf in South America.

In 1982 the lead singer was Michael Schanze - with “Olé España” the background choir could hardly be more heterogeneous. National coach and Rhenish cheerful nature Jupp Derwall thundered almost more vehemently than goalkeeper Toni Schumacher - others only moved their lips a little and seemed less confident in the text.

Peter Alexander sang “Mexico mi amor” in 1986. Pierre Littbarski, Lothar Matthäus and Co sang along softly in ponchos and sombrero. In 1990 Udo Jürgens was allowed to run again. "We're already on the Brenner, we're dying to do it," sounded a bit strange in view of the many Italian legionnaires. But their success proved them right: it was enough to win the world championship.

At the 1990 World Cup in Italy, locals were still singing the official song: Gianna Nannini smacked “Un estate italiana” (An Italian Summer). In 1994 in the USA the FIFA song was called "Gloryland" and came from Daryl Hall and Sounds of Blackness. For the 1998 World Cup in France, the Latino pop singer Ricky Martin sang his "La Copa de la Vida". In 2002 the soul singer Anastacia (“Boom”) was allowed to play in Japan and South Korea.

In 1994 the then quite conservative DFB broke new musical territory. In keeping with the USA, the Village People sang “Far Away in America” in English. Surrounded by the gay band from the disco era of the 1970s, in Indian and police costume, Mario Basler and Berti Vogts, for example, looked a bit out of place. Since the 1990s there has not been a self-sung World Cup song by German footballers.

For Germany's “Summer Fairy Tale” World Cup 2006, FIFA selected “The Time of Our Lives” from the classic pop quartet Il Divo. But hardly anyone should remember this work. Many people are more likely to have the World Cup anthem “Time that something is turning” by Herbert Grönemeyer, which was also commissioned by FIFA, or the whistling song “Love Generation” by Bob Sinclair. But the main hit was "'54, '74, '90, 2006" from the German indie rock band Sportfreunde Stiller. Before every game, the national team listened to Xavier Naidoo's «This Path» to encourage them.

The Colombian Shakira sang the official 2010 World Cup song. She recorded "Waka Waka (This Time for Africa)" with the South African band Freshlyground. Shakira also presented the song at the graduation ceremony on July 11, 2010, the hit was in the top 10 in the German charts for weeks. “A simple sing-along melody, plus bum-bum-stamping and a few ethnic elements that are removed remember the venue of the tournament ", commented the" Süddeutsche Zeitung "and asked:" Why is Shakira, a pop multimillionaire residing in the Bahamas, daughter of a Lebanese-American father and a Spanish-Colombian mother, actually Africa? "

The official song for the 2014 World Cup in Brazil was the track "We Are One (Ole Ola)", which US musician Pitbull recorded together with Jennifer Lopez and the Brazilian singer Claudia Leitte. Together the three presented the song at the opening event on June 12, 2014 in the Arena de Sao Paulo.

The official World Cup anthem for the 2018 World Cup in Russia is "Colors" by Jason Derulo. The song by the American singer is somewhat hopeful and halfway danceable and sounds like so many tracks nowadays: A bit of pop, a bit of R&B, beats and sounds from the computer - that's not really a catchy tune. Derulo said he was inspired by the beauty and diversity of the world for the song. That's nice and very topical. But it doesn't necessarily sound like football.

All possible and impossible soccer songs can be found on the website www.fc45.de. From the cheap club anthem to singing attempts by badly advised footballers to the World Cup song - the website operators Michael Schäumer and Trevor Wilson, ex-radio presenter, compile all the German-language football songs that they can get their hands on. Since they see their site as an archive, it also includes politically unacceptable works that come across as World Cup songs - from which the two clearly distance themselves. 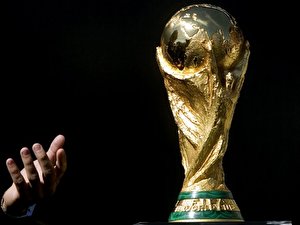 Fan mile, public viewing and fan festivals in Berlin plus fixtures and more for the 2018 World Cup in Russia. more 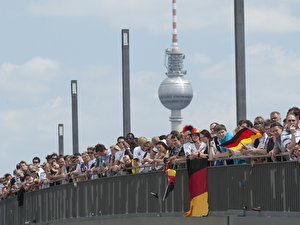