How is time defined? 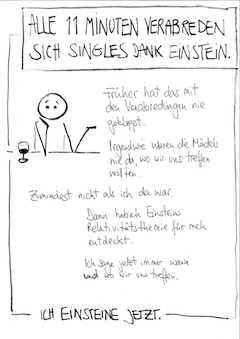 The theory of relativity is more applicable than many think. Image: DESY

The term "time" appears in many contexts of our everyday life: You can see it as a gift, count and stop, oversleep or kill it, even read it or write books about it *.

In physics, time is one of the fundamental quantities. It runs steadily and inexorably in one direction, from the past that we can explore, to the future that is open, from birth to death. The time defines a "before" and "after". People divide them into units that can be measured extremely accurately; Hours minutes seconds. If it was previously determined that 24 hours, i.e. one day, corresponded to one revolution of the earth around itself, today the time is determined much more precisely: One second corresponds to 9 192 632 770 periods of radiation of the transition between the two hyperfine structure levels of the ground state of atoms of the element Cesium-133.

So is time the absolutely universal yardstick and runs inexorably and always at the same speed from the Big Bang to the present day - tick-tack-tick-tock? Unfortunately, if you look closely, things are a bit more complicated:
It starts with the fact that there was no time for the Big Bang - and even before that. Or rather: with the physical models with which we describe the formation and composition of the universe, the concept of time also collapses at the time of the Big Bang.

Since the Big Bang, time has been an important factor in understanding our world. But although it appears to be a unique yardstick, since Einstein's theory of relativity it is "only" a quasi-equal part of our physical model for describing the universe. The theory of relativity closely links time with the spatial dimensions of "space-time", which spans our universe in four equal dimensions, three spatial directions and time.

It is of course very difficult for us to put aside our usual difference in perception between space and time and to regard both as part of a whole. Einstein himself, who liked to work with pictures and thought examples, made it clear with a simple example: If two people want to meet, it is of little use to only find a meeting point or a time. You need both to really be in the same place at the same time. So we almost automatically take over part of the theory of relativity, the dependence on space and time, in our everyday life without even realizing it.

The next confusing property of time is also described with the theory of relativity: Time does not run at the same speed in all places. The faster a system, for example a flying satellite, moves, the slower the time runs there. This effect can even be measured in an airplane: When you come back to a stationary clock that is measuring at the same time after a sightseeing flight, you notice that the stationary clock is already showing a slightly later time, i.e. the time in the airplane passes more slowly. Here, by the way, you could think about the correctness of the saying "Time flies by". But back to Einstein: The difference is marginal, but today's precision measurements, for example for the satellite navigation system GPS, would be almost impossible without taking into account the theory of relativity. There is also the "perceived relativity": If you find this text boring (and still have not got out), the time it takes to read it seems incredibly long. If you find it exciting, you'd be surprised how long you've been into physics. So time is also a matter of feeling.

But here we wanted to stay physical: A special feature makes time really unique: As well as you can move forwards and backwards in a room, you cannot move backwards in time - with the exception of films like "Back to the Future" . There are processes in physics that look the same forwards and backwards (for example the collision of two billiard balls). Therefore, the time does not play a role in their description. But with many processes it is obvious that they can only take place in one direction - the demolition of a building, for example. What is happening there is really irreversible. A physical quantity is responsible for this uniqueness, which is even less conceivable than time: entropy. But we will present them at a later date.