How would you destroy a star

Will the star cluster closest to the Sun be destroyed?

Star mapping data from ESA's Gaia satellite has provided revealing evidence that the star cluster closest to the Sun is being destroyed by the gravitational impact of a massive but invisible structure in our galaxy.

If so, it could be evidence of a suspected accumulation of "dark matter subhalos". It is believed that these invisible particle clouds are relics from the time our Milky Way was formed. They could now be spread across the entire galaxy, forming an invisible substructure that would exert a noticeable gravitational influence on anything that comes too close to them.

ESA scientist Tereza Jerabkova, her colleagues from ESA and the European Southern Observatory discovered this when they examined how a nearby star cluster disappears in the general star background in our galaxy. This discovery was based on data from the Gaia Early Third Data Release (EDR3) and data from the second release.

The team chose the Hyades because it is the closest star cluster to the Sun. It is located at a distance of a little more than 153 light years from Earth and is easily recognizable for sky observers in the northern and southern hemisphere in a conspicuous "V" formation of bright stars that form the head of Taurus in the constellation Taurus represents. In addition to the easily visible bright stars, telescopes can be used to discover about a hundred fainter stars, which are located in a spherical zone in space at a distance of about 60 light years.

However, a star cluster will naturally lose stars as the stars move within the cluster and gravitationally attract each other. Due to these constant gravitational forces, the speeds of the stars change somewhat, so that some of them get to the edge of the cluster. From there, the galaxy's gravitational pull pulls the stars out, creating two long tails.

One tail pulls behind the star cluster, the other pulls ahead of it. Known as tidal tails, they have been extensively studied in colliding galaxies, but until recently they were not recognized by anyone as part of a nearby open star cluster. 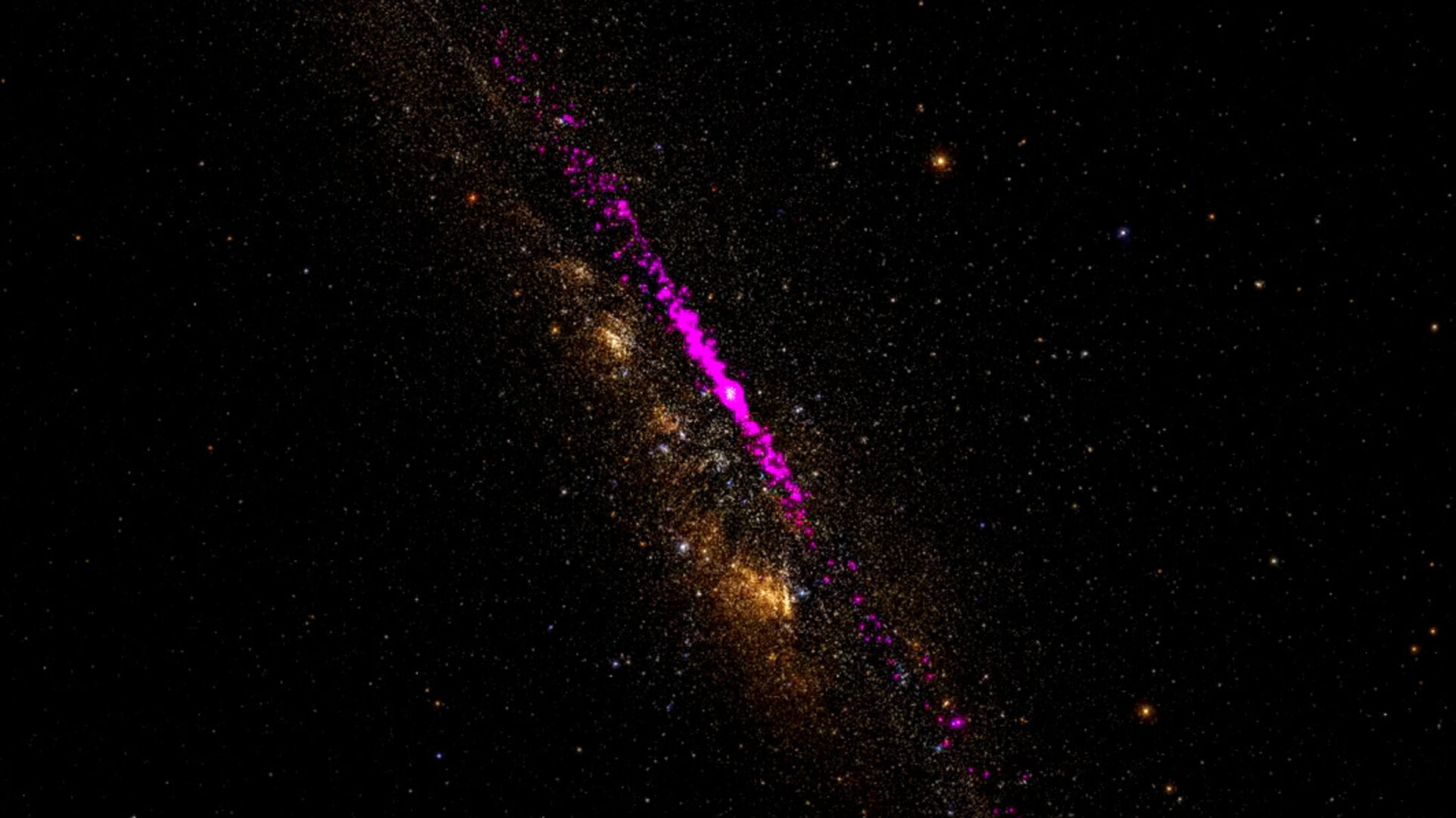 The key to finding tidal tails is knowing which stars move in the sky in a similar way to star clusters. This is now easily possible with Gaia, because the telescope precisely measures the distance and movement of more than a billion stars in our galaxy. “These are the two most important quantities that we need to find tidal tails of star clusters in the Milky Way,” says Tereza Jerabkova.

Earlier attempts by other teams were only partially successful because the researchers only looked for stars whose movement exactly matched the movement of the star cluster. As a result, those of them were not discovered that had already emerged earlier during their 600-700 million year old history and are now in other orbits.

In order to capture the variety of orbits to be searched, Tereza Jerabkova constructed a computer model that simulated the various disturbances that could have acted on the emerging stars of the cluster during hundreds of millions of years in space. Only after executing this program and then comparing the simulations with the real data did the true extent of the Hyaden tidal tails become apparent. Jerabkova and her colleagues found thousands of former stars in the Gaia data. These stars are now divided into two giant tidal tails that span the galaxy for thousands of light years.

But the real surprise was that the trailing tidal tail seemed to be missing stars. This suggests that something much more powerful is taking place, and that the star cluster is not just gently “breaking up”. 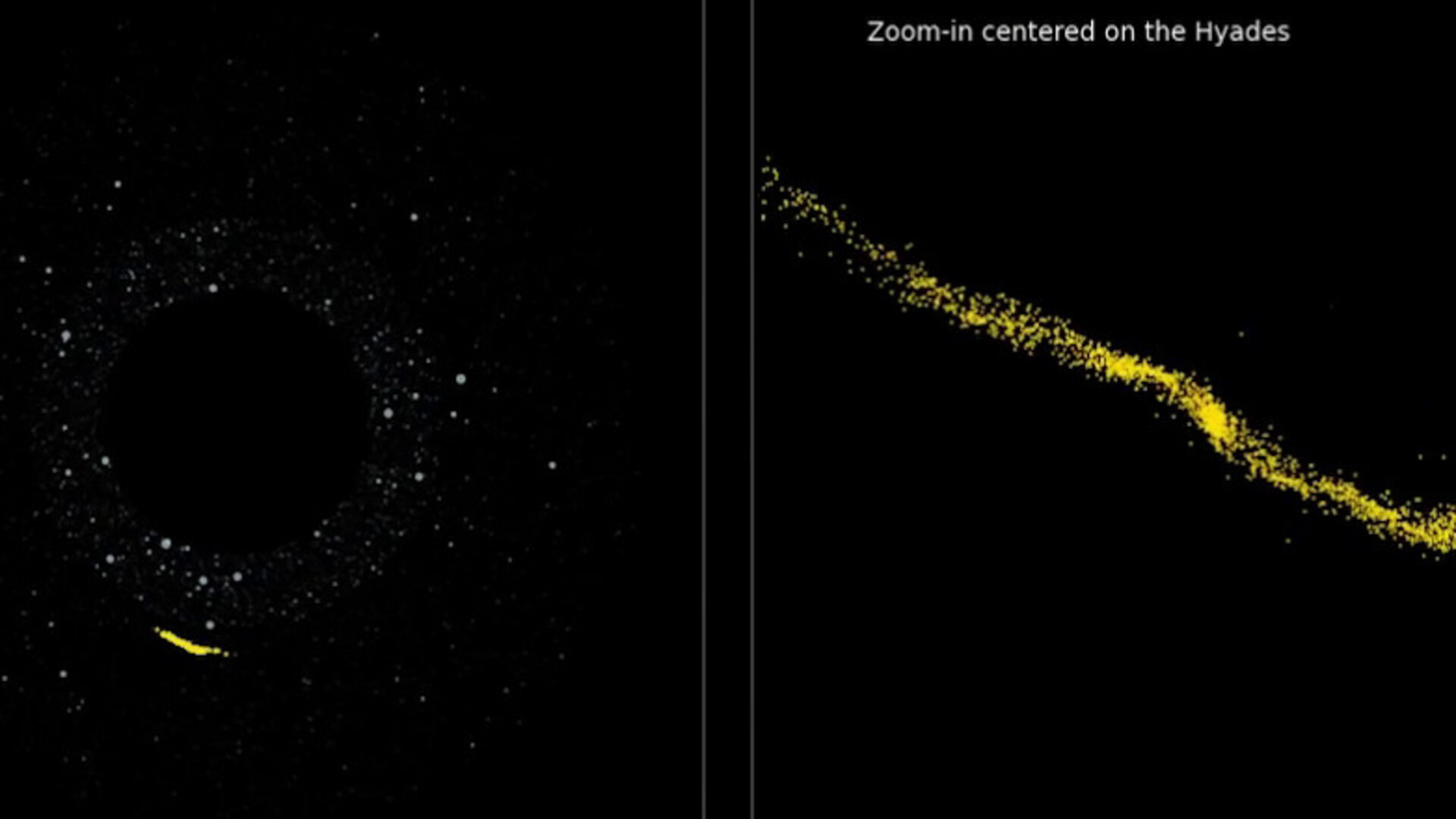 Running the simulations again, Jerabkova showed that the data could be reproduced if that tail had collided with a cloud of matter containing about 10 million solar masses. “There must have been a close interaction with this really massive lump, and the Hyades just got smashed,” she explains.

But what could this lump have been? There are no observations of such a massive gas cloud or star cluster nearby. If no visible structure is discovered in future targeted searches either, it could be a subhalo made of dark matter, according to Jerabkova. These are naturally occurring clumps of dark matter that are believed to have helped shape the galaxy as it was formed. This new work shows how Gaia is helping astronomical research to map this invisible structure of dark matter in the galaxy.

“With Gaia, the way we see the Milky Way has changed completely. And with these discoveries we will be able to depict the substructures of the Milky Way much better than ever before, ”says Jerabkova. And after she and her colleagues have demonstrated the application of the technology to the Hyades, they are now expanding their work and looking for tidal tails in other, more distant star clusters.

Thank you for liking

You have already liked this page, you can only like it once!