In the Green LTE tariffs in the Telekom network, mobilcom-debitel offers VoLTE and WiFi calling at low prices.
Screenshot / Montage: teltarif.de Technical progress is unstoppable. Anyone who wants to be reachable on the move today needs LTE, the fourth generation of mobile communications, because the end of 3G (UMTS) is imminent and the days of 2G (GSM) are already numbered.

LTE is not LTE

But LTE is not always LTE. In order to be able to make mobile phone calls, which you still want to do from time to time, you absolutely need the VoLTE function (Voice over LTE) with LTE these days. This function is currently only available in the Telekom and Vodafone networks for term contracts, called "postpaid" in jargon.

Only Telefónica (o2) offers its customers the VoLTE and WiFi calling function as standard in all tariffs and variants (including prepaid) at no extra charge.

VoLTE at Telekom or Vodafone only in term contracts

In the Telekom and Vodafone networks, VoLTE / VoWiFi-enabled term contracts start at over 30 euros per month.

At Telekom it is even a little more expensive (without promotional discounts): the official price list names 39.99 euros from the first month. 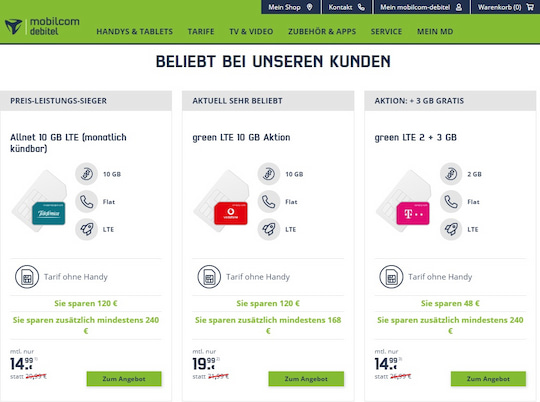 At the moment, mobilcom-debitel can only offer VoLTE and WLAN-Call in the Telefónica (o2) and Telekom networks; Vodafone does not yet work.
Screenshot: teltarif.de It is also much cheaper with the service provider mobilcom-debitel. It offers its "green LTE" tariffs, either in the Telekom (D1) or Vodafone (D2) network. The functions VoLTE (telephoning via LTE) and WLAN-Call (VoWiFi = telephoning via WLAN / WiFi) are currently only possible in the Telekom network (this is planned for the future at Vodafone)

The current green LTE tariff in the Telekom network with monthly 2 GB + 3 GB on top currently costs 14.99 euros in the first month and from the 25th month it would be an absolutely fair 16.99 euros. At the start, a one-time connection price of 39.99 euros has to be paid. If we convert that to the first 24 months, there are still a bearable 16.65 euros per month left, which is less than half of the original.

The devil is in the details

In the Green LTE tariffs in the Telekom network, mobilcom-debitel offers VoLTE and WiFi calling at low prices.
Screenshot / Montage: teltarif.de So everything would actually be "okay", but in practice there are many pitfalls.

In order to be able to use VoLTE, you need a VoLTE-capable mobile phone that also supports VoLTE in the selected network (here Telekom D1). That alone, as we have already reported, is a medium drama. The most uncomplicated when it comes to VoLTE or VoWiFi are the Apple Group's cell phones with the iOS operating system. Insert the card, go to "Settings (cogwheel) / Mobile network / Data options / Language & data / LTE, VoLTE on" and the mobile phone is ready to go.

With Android devices it should actually work "out of the box", possibly search through all options under the network settings, this is a little different for every manufacturer despite the same Android version. Some devices (e.g. from Google Pixel) have to be reconfigured, tips can be found on the Internet.

How do I test VoLTE?

After setting up the mobile phone, check whether you have LTE / 4G reception (as long as WLAN is switched off!) And establish a telephone connection, for example to the Telekom mailbox (speed dial 3311). If the LTE / 4G display remains on during the call, VoLTE is really active. If the display jumps back to 3G or E before reaching the remote station, then it does not work.

The right way is to call the mobilcom-debitel hotline, which can be reached on a regular Hamburg landline number, and describe the problem.

But surprising things could happen. The statements ranged from "This is not possible in your tariff" to "That has long been activated". With a teltarif.de reader it still didn't work. He called several times and reached various hotliners until he caught one with which the following dialogue developed (analogously): "I see here that VoLTE and WLAN-Call are activated for you. You say it doesn't work? Then stay Turn it once. " The hotliner apparently picked up another phone, so the customer could overhear. "Who is responsible for activating VoLTE and WLAN-Call? Ah, Ms. Anyway, number? Thanks, I'll call them." No sooner said than done, the customer could overhear the following conversation: "At the customer's [teltarif.de readers] VoLTE does not work. "Answer:" Tell him it will work in 24 hours, it may take longer. "Question:" Out of curiosity, what was wrong now? "Internal answer:" He needs that Customer not knowing at all. "

Believe it or not, a few minutes later the customer was able to call VoLTE.

There was also the case that a customer with VoLTE could suddenly no longer use VoLTE; the hotline was also able to repair the problem here.

Many tech-savvy customers would like to have direct access to second-level support (where the real experts are) for such questions. But that would probably paralyze the entire service operation immediately.

VoLTE and VoWiFi are mandatory

In any case, one thing is certain: Anyone who wants to make mobile phone calls away from metropolitan areas today needs the VoLTE function. If the reception in your "own" four walls (or in the office or in a hotel) is not so sparkling, but internet access with a WLAN router is available, WLAN-Call can save the necessary telephone call.

The green LTE tariffs (without cell phone) from mobilcom-debitel show that there is still air in the apparently so "expensive" prices. You can find more information about the current offers in our tariff comparison. The default "VoLTE" can also be checked there, then only VoLTE-compatible tariffs are displayed.