How does a SAM destroy an airplane

How dangerous are Russian missile defense systems in Syria for Western naval forces?

On the eve of the western air strikes on Syria in April 2018, Russia warned that it would shoot down all western air weapons if they attack Syria. The Russian Defense Ministry even claimed that fighter jets in its Pacific fleet had trained to intercept and destroy a "low-flying, long-range cruise missile". But when the Americans, British and French actually carried out air strikes, the Russians did not react. Since further western air strikes are at least possible, two questions arise: Can Russia react to such western air strikes with the weapon systems available to it in the Middle East? And, if so, the Russian armed forces in Syria, and in particular the S-400 anti-aircraft missile (SAM) batteries stationed at the Hmeimim military airfield and at the Masyaf missile base, and the S-300VM batteries at the Tarsus naval base, pose a serious threat to Westerners Naval forces?

Both of the weapons systems mentioned here can defend themselves against airborne tactical ballistic missiles, cruise missiles and aircraft. Since attacks on land or sea targets are only secondary tasks of these missiles, they do not pose a serious threat to aircraft carriers or destroyers of the US Navy. The effective range against ground targets of these SAMs is limited to the radar horizon (approximately 30-40 km or a little further if they are stationed on heights, as in Masyaf). It is therefore extremely unlikely that western naval targets will come within range of these missiles in the event of further combat missions.

However, the bastion missile systems supplied by Russia and operated by Syria for coastal defense (SSC-5 with the missile SS-N-26) pose a threat to western ships. They could be surface combat ships up to a distance of around 300-350 km attack when they are provided with external target acquisition data, for example from Russian aircraft monitoring the airspace over the Syrian coast. But the range of the Bastion missiles is limited to around 120 km if they were to attack in low-flight mode, which would no doubt be the case for targets protected by the AEGIS missile defense system, such as US naval forces. Cyprus would also be out of their reach. Except for the case of an extremely lucky hit, it would likely take two to three Bastion missile hits to disable an Arleigh Burke-class destroyer or Ticonderoga-class cruiser in a combat situation, and up to eight to twelve bastion missiles to incapacitate an aircraft carrier. Syrian government forces have no more than four to six launchers with two missiles per launcher, so they do not pose a serious threat to US naval forces in the eastern Mediterranean.

The ability of Russian armed forces to shield Syrian land targets against Western missile or cruise missile attacks is another question. The S-400 system is designed to use its 48N6 guided missiles to fight aircraft (mostly fixed-wing aircraft) and cruise missiles up to a distance of 250 km. Its main shortcoming is that the S-400's land-based fire control radar can only detect targets, even at this range, if they are flying at an altitude of 30,000-40,000 feet (9.14-12.2 km).

The effective range of the Russian air defense systems deployed in Syria against cruise missiles (flight altitudes between 30 and 100 m) or against low-flying aircraft is limited to their radar horizon, which is around 30-40 km for low-flying targets. This means that Russian systems stationed in northwest Syria cannot protect targets more than approximately 40 km from their positions in Hmeimim and Masyaf and from the Tartus naval base.

Within their limited interception range, both the S-400 and S-300VM are quite effective weapons against cruise missiles. In order to increase the interception effectiveness against low-flying cruise missiles, S-400s were designed in such a way that they shoot up steeply on take-off and then one Look down-shoot down-Perform radar location in which targets moving at high speed are detected against the background of the earth's surface using the Doppler frequency shift through the illuminating echo signal of the S-400 fire control radar. In the event of a massive cruise missile attack, the S-400 system would likely be the Shoot-Assess-Shoot- Use tactics, i.e. fire only one interceptor missile at a time on each detected cruise missile. This is feasible because cruise missiles are relatively easy to hit targets because of their low speed and their limited ability to perform evasive maneuvers, once they have been detected. It can therefore be assumed that, as a rule, ten S-400 missiles launched within the effective combat zone with a radius of 30–40 km around the location of the fire control radar would destroy between four and six approaching cruise missiles. 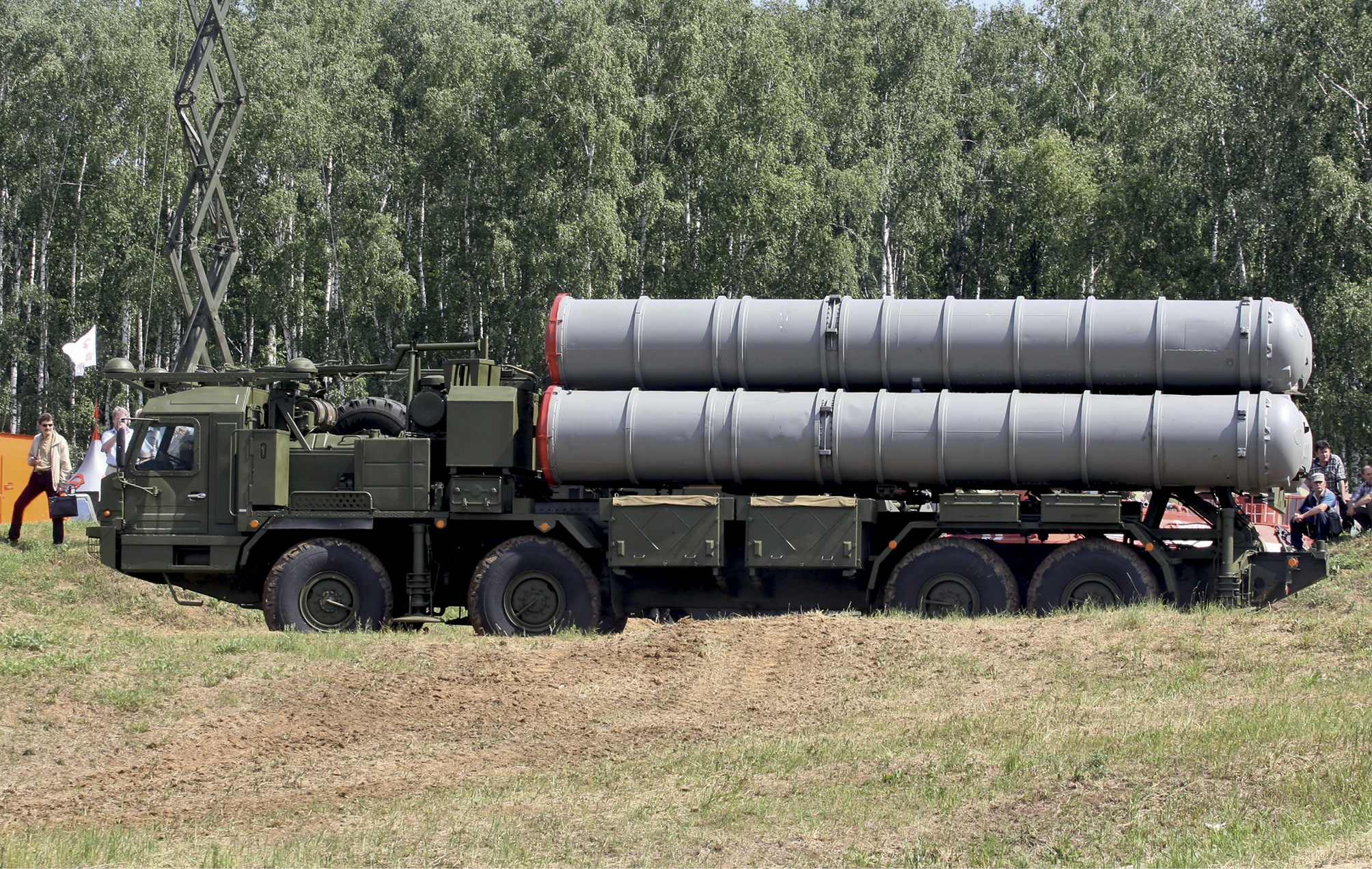 However, there are two significant factors that limit usability. The Russian air defense umbrella is impressive, but by no means impenetrable. First, the S-400's 92N6 fire control radar operates only within a limited search sector of 90–120 degrees. Only in this sector can it perceive approaching threats and illuminate them for the interceptor missiles, which then lock onto these targets. The semi-active search heads of the S-400 guided missiles of the type 48N6 require an external radar, which permanently illuminates the targets assigned to them for interception. This means that the fire control radar must continuously illuminate targets during take-off and the interception phase and cannot scan in different directions. This makes the S-400 susceptible to so-called "star attacks": numerous missiles approach a target from widely spaced directions at the same time and overwhelm it.

Each S-400 battalion consists of one or two target acquisition radars, the 92N6, and up to four fire batteries, each with a command vehicle and two subordinate launch vehicles. Russia stationed two S-400 units in Syria: one unit shields Hmeimim against air strikes, while the other is stationed on a base (which also houses bunkers for bastion missiles) in the governorate of Hama, 13 km northwest of Masyaf , lies. In the event of a massive cruise missile attack that had to be repulsed, the Russian S-400s stationed in Syria would have to take on missiles that would approach from almost opposite directions (from the Mediterranean and the Persian Gulf) at the same time, as was the case with the most recent attack. Such a thing would pose considerable difficulties for targeting radars. Incidentally, the same applies to the S-300 systems.

The second limitation on Russian interception capabilities is the limited size of the anti-missile magazines for S-400 batteries. Each S-400 launcher (of which there are four in Hmeimim and four in Masyaf) has four ready-to-launch missiles. So only 32 interceptor missiles are available to combat approaching cruise missiles. After all these interceptor missiles have been fired - which will be the case after they attack a maximum of 32 cruise missiles (of which they should shoot between twelve and nineteen), the S-400 would have to be reloaded. The time required for this is 50 minutes according to the regulations of the Russian military. Well trained operating teams could possibly do this in 25-30 minutes. But even with such a spectacular performance, there would be a large window of time in which the S-400 could not carry out their air defense task. The Panzir-S1 point target defense systems deployed together with the S-400 can only protect the S-400 against direct attacks, which is a difficult task in itself.

Russia has many more capabilities that can threaten the US and a variety of capabilities that could be deployed on Syrian soil. At the present time, however, it can be said that the existing Russian air defense systems there are unable to protect the country against sustained military strikes by the West.