Will the internet destroy human civilization in the future?

Offline! - When will the internet die?

the psychology of irrational thinking

I admit my new book Offline! is not necessarily a purely edifying read. After all, I predict the end of the information society, not in a million years, but in this century. Why this? It's actually quite simple: We just pay far too little attention to the foundations of our technical civilization, on the contrary, we destroy them.

By the end of the century the number of people could shrink from 7 billion now to less than 3 billion and civilization could fall back to the level of the 19th century. 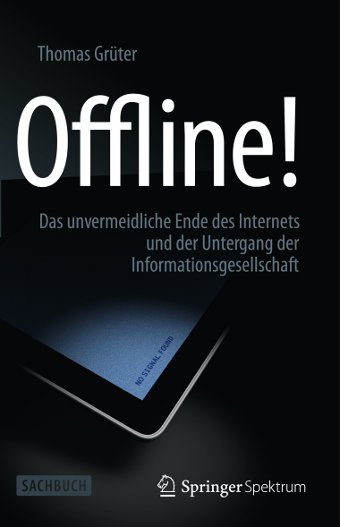 It seems natural to us that the ceiling lamps come on when we turn the light switch, or that hot and cold water flow when we turn on the tap. With the Internet, colorful pictures and news from all over the world are always available, with a smartphone even in almost all places. Wikipedia gathers the knowledge of the world, and even scientific publications on almost all topics can be read on the computer after a short research.

Soon the internet will control our entire life. Smart houses, self-driving cars and possibly even computers with almost human intelligence are promised. The distribution of electricity is regulated across Europe via a filigree internet structure, so that millions of solar cell roofs and wind turbines are optimally used. Electricity consumers such as washing machines or industrial plants can be switched on or off centrally in order to adapt the consumption to the supply.

Universities have started broadcasting courses, seminars and lectures over the Internet, and the chronic space shortage in universities could soon come to an end. Strictly speaking, university professors will no longer even need an office in the future; a home office will suffice.

Countries like Sweden or Canada have already considered abolishing cash. You only pay by card or mobile phone. Black money is a thing of the past and it is very difficult to evade taxes and social security contributions.

The so-called Internet of Things (IoT) will soon be providing all possible devices, objects and goods with a chip and connecting them together via the Internet. The refrigerator then agrees with the stove what should be cooked and orders the ingredients on the Internet.

Perhaps in a few years, people will have implemented a health chip. He then constantly measures the heartbeat and other vital parameters. As soon as he senses danger, he sounds the alarm. Of course, he has also saved the entire medical history so that every doctor can determine immediately whether a patient is chronically ill or has genetic risk factors.

It all still sounds like a collection of modern fairy tales. Many will now think of the famous phrase by science fiction author Arthur C. Clarke: "Any sufficiently advanced technology is indistinguishable from magic."

The end of technical magic

But how stable is this development? The second half of the 20th century offered ideal conditions for rapid technical progress. It was largely free from major natural disasters. From the 1970s onwards, famines only occurred in the wake of regional wars; there have been no world wars since 1945.

We cannot expect that the 21st century will continue so untroubled. Therefore, in my current book Offline! raised the question of whether the Internet will survive a major catastrophe unscathed. What happens if at some point we have to pay the bill for the constant overexploitation of global resources? What if climate change leads to global floods and famine?

The result is as clear as it is depressing: after two decades of absolute dominance by the Internet, the global communications network is likely to tear apart. This decline can destroy our entire way of life if we do not take precautions. Isn't that a bit of an exaggeration? Let's take a closer look at the problem areas:

Never in the history of mankind has such an extensive network of invisible supply systems existed - and never have we been so dependent on it. But the invisible network of power cables, water pipes, sewers and communication lines is not built to last. It has to be constantly renewed. While the copper cables of the power lines last for decades, the functional elements of the new digital networks are extremely short-lived. The GPS is attached to 24 satellites, each with a lifespan of 10 years. If there were no supplies for just two years, simply determining the position would be over. In addition, the central facilities of the Internet are more vulnerable than one might think.

The internet, modern computer technology and digital communication are a result worldwide Raw material and product flows. The continent of Europe would not be able to maintain the current state of digital technology on its own. But what happens when a major war breaks out that tears up the trade networks?

3. Loss of knowledge and skills

Knowledge is fleeting, yes, it even disintegrates at breathtaking speed. An example: at least 99% of all works of antiquity were lost in the chaotic years between 300 and 600. It could get even worse in the 21st century: while books and scrolls remain legible for centuries, digital data carriers barely last a decade. In addition, the file formats change to the point of illegibility within a few decades. We are threatened by a digital dark age.

4. The world economy, a pyramid scheme

The world economy has to grow steadily if it is to remain stable. Companies only invest when they expect more profit. At some point, however, the economy has to collapse, endless growth is impossible. Then the huge factories for chips, hard drives or cell phones are suddenly unprofitable. Should production suddenly collapse, we would soon be in trouble, because today's high-tech products only last a few years. After just two to three years, GPS, cell phone network and internet would hardly be functional.

If the information society is to survive, there must be no world war, devastating natural disaster or major crisis in the global economy in the next 50 years. The effects of climate change must not lead to global starvation or epidemics. The overuse of resources must not become a problem. All in all, we need a lot more luck than we can realistically expect.

In my book, I strongly warn against making the Internet the backbone of our entire way of life, as long as there are no reserves for emergencies. The dictate of cost optimization, however, enforces a system without large reserves, which falls apart very quickly in the event of major disasters. We are always building new digital structures without worrying about the foundations. If this building cracks in one place, it could collapse. Then we lose more than just the internet. Our entire way of life is being destroyed. Business, administration, health care and universities are hardly able to work. Much of our technical knowledge will be lost.

If you want to know exactly, you should read the evidence in my book. By the way, I like to be refuted, yes, to be honest, I'd rather be wrong here than right. So: make an effort!